When I first heard about a food truck meet in Cleveland I was intrigued.  Then I looked at the list of trucks that would be in attendance and I knew this was going to be an event that I didn't want to miss.  The event took place on a cold, but sunny Sunday, March 27th from 11am-3pm at Lincoln Park in Tremont.  I arrived bright and early at 10:45am because I knew that parking would be crazy and I was sure that lines would be pretty long if I got there much later.   I also wanted to be sure to get some good pictures before the "March Madness" started!
Here are pictures of the trucks that were in attendance:
The first thing I decided to try was Dim and Den Sums Ribs and Buns.  Ribs and Buns were coffee braised short ribs, steamed bun, marinated cucumber, green onions, and cilantro slaw.   The short ribs were tender and very flavorful.  The cucumber, onions and slaw all added a nice fresh flavor to the rich short ribs.  I would have loved two of these if there were not other trucks around! It was also very cool to finally meet Chris and Catie Hodgson of Dim and Den Sum. 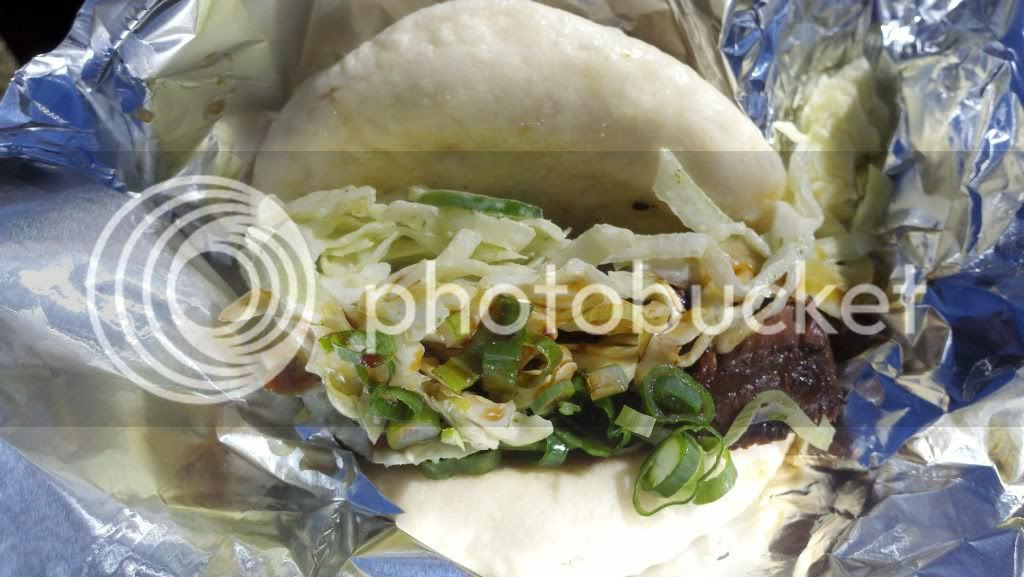 After eating a pretty filling sandwich from Dim and Den Sum,  I decided to try Fahrenheit's Meatballs and Gravy.  The meatballs were flavorful and the sauce that came with them was somewhat sweet.  Everything was well seasoned and I was glad to have gotten this because of its warmth!  The only thing I was sad about was that after I ate the 4 meatballs and some bread I was pretty full!   It was my first time meeting Check Rocco Whalen which was also a pleasure! 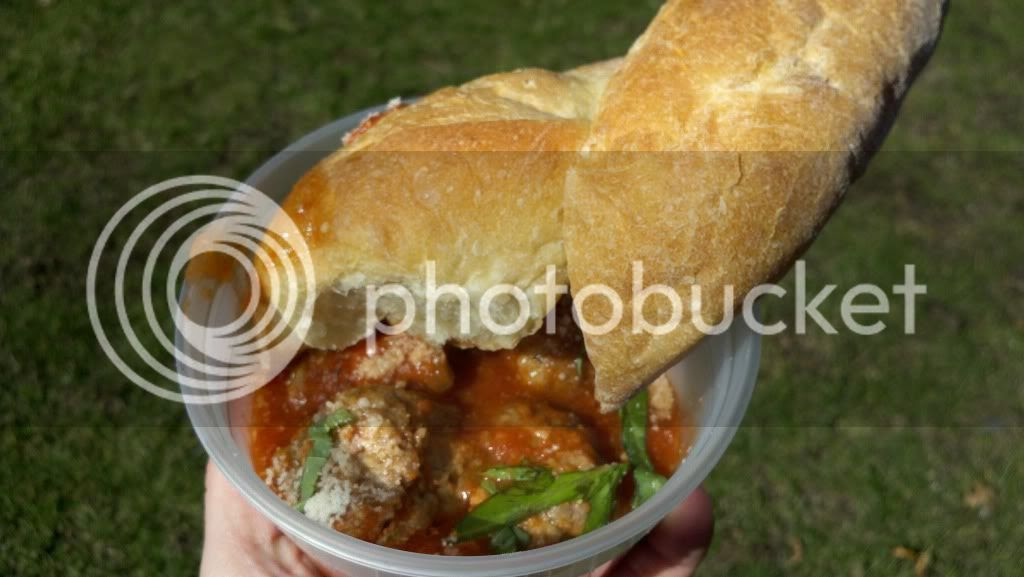 At this point I was full!  I mentioned to fellow foodie Edsel Little, who I ran into earlier in the morning,  that I was going to make a trip to Lilly's Chocolates to help walk off some of this food. (Plus, I've never been to Lilly's.)  He decided to join me for the short walk so we left the park around 11:45am.  We returned to the park around 12:20pm we were shocked to see just how many people were there.  With about 100 people in each line (7 trucks), and others just walking around we estimated there were about 1000 people in the park by this point! 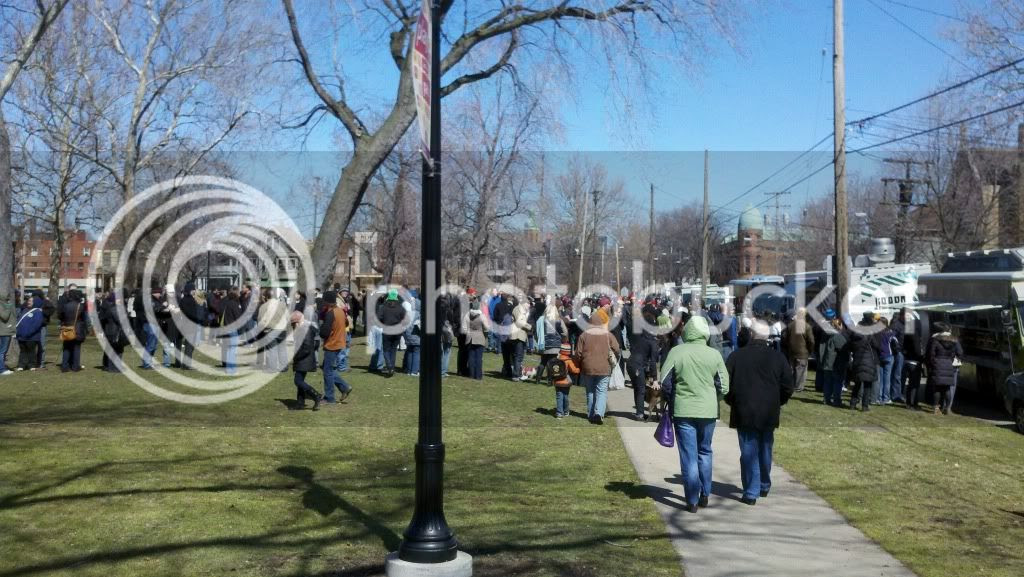 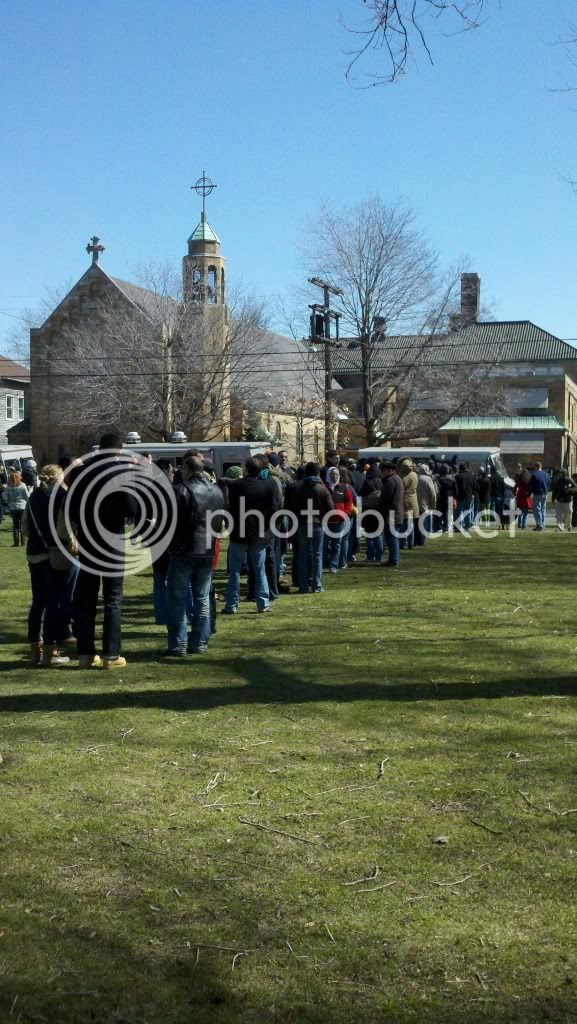 As much as I would have liked to have another bite to eat from another truck I didn't feel like standing in line for an hour.  I have read some comments already complaining about the lines and the fact that some trucks ran out of food.  I am going to cut all of the trucks some slack because this was the first event like this.  My hope is that for the next event that the food trucks work together to figure out a way to serve the masses that are likely to come out again!  Overall this was a very fun event and I enjoyed the food that I did manage to get my hands on.  I look forward to the next event, and hopefully some warmer temperatures!!!

I was there as well and had a great time. These food trucks had some awesome food! I went to StrEat and Fahrenheit and would easily go again. I got there at about 11:05 and there were already people in line. I left just before 12 and the lines were crazy long.

Yeah, I was one of the ones standing in line for an hour. However, the Mac n Cheese from StrEat was really good. Hopefully they come to University Circle at lunchtime :)

My suggestions to make this a better event: 1) Incorporate small groups of musicians (blugrass type that don't need electricity) in different corners to occupy and entertain people. Entertained folks complain less. 2) Announce that x% of the proceeds will benefit some area non-profit.
Congratulations on a successful event, and I look forward to future ones!
Susie Sharp, Cleveland, Ohio

Agree with your review.
We will be doing our review tomorrow.

I've heard mixed reviews, but it's such a cool idea and goes to show how the food truck scene is huge right now in CLE. Too many people is a good problem to have...who would have thought with it being so cold?! I'll definitely be in line at the next one.

Very smart getting there even earlier than we did! And you sampled the food that I wanted. :) Here's hoping that they plan another one! One that also involves a tweet up for all of us.

I stood in line for Pad Thai (my favorite thai dish) and even with the fast output Umami Moto's was the best I have ever had! Will try the rest of their menu next time.

I had the lamb slider at Farenheight which was good. And was to cold to stand in line anywhere else. Knowing that they will be back next month! GO FOOD TRUCKS - GO CLEVELAND! 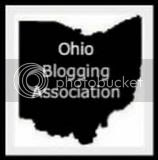