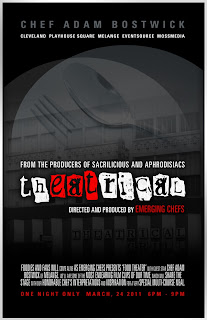 The first ten people to Buy Tickets from this link will receive a "ThEATrical" commemorative 11x17 print!  http://www.eventbrite.com/


Chef Adam Bostwick of Melange Finds Food Inspiration in Movies
Emerging Chefs is proud to announce “The Theatrical” as prepared by Chef Adam Bostwick of Melange. The event will be hosted at the East 14th Street Theater in the historic Hanna Building in Downtown Cleveland. Emerging Chefs will host the event on March 24th, 2011 from 6:00 pm to 9:00 pm.
So who is Chef Adam Bostwick???
His first restaurant job was at Nino’s Italian Restaurant in North Ridgeville when he was 14 years old. Within a year he was integrated into the line and began preparing all the food and recipes from scratch. During the summer of 1999, he earned a job with Creative Concepts in Catering. It was during this time he worked under Nancy Yetman who, in the Chef’s words, “Helped to get me where I am in my career today.” In 2002, he was offered a culinary position by Chef Carmen Oppedesano to run the kitchen at Bon Appetito. From there, he went to work with Chef Brian Okin at Okin’s restaurant Ben Venuti. In 2008, Chef Bostwick, along with Chef Matt Creighton, were promoted Co-Executive Chef at Melange. His culinary philosophy is simple: He wants to create food that people love to eat but with a twist. He believes food should be fun and exciting, not complicated.


Want to see the Menu....Here is the Link: Menu
Ticket Information
The first ten people to Buy Tickets from this link will receive a "ThEATrical" commemorative 11x17 print!
http://www.eventbrite.com/
Be sure to check out my review of their last event, Sacrilicious.

Looking forward to this one too!

i'm going to try to get to the april one of these cause i'm doing dinner in the dark this month. sounds cool.