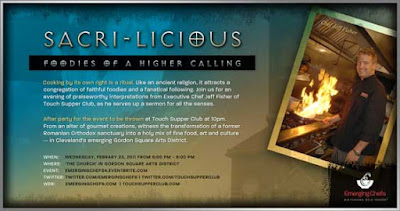 I'll be attending the Emerging Chef's Event "Sacr-licious" on Wednesday the 23rd which will feature the culinary mastery of Jeff Fisher.  Jeff is the executive chef at Touch Supper Club.  When Emerging Chef's asked me if I would be interested in interviewing Jeff, I jumped at the opportunity to talk to such a talented chef. During the interview Jeff was very open and honest with every answer.  Jeff is not shy in telling all about his past and his love for food.   The interview quickly turned into a great conversation.  I wanted to keep that great dialog between us going, so for each question I'll give you a summary of all that Jeff told me.

Chef Background
CFB-What got you interested in cooking?  When did you decide to become a Chef?
Who in your life has influenced your cooking the most?
JF-Jeff grew up in a very small town in New Hampshire.  His family ate very traditional dinners that included many fresh ingredients that they grew in their two gardens.  With having these two gardens the family did a lot of canning which meant they always had quality homegrown ingredients to use throughout the seasons.  Jeff's mom was great cook.   He remembers when he was 7 years old he made a pizza with her and that was one of his most fond cooking memories as a child with her.  Jeff always had a passion for food and cooking, but instead of going that route right away he attended Ashland to play football and basketball.   Once Jeff got back into the kitchen, he worked his way up the ladder from dishwasher to where he is today.  Jeff mentioned Chef Kevin Perry chef as an inspiration when he was working his way up and at a country club.   Jeff also said that his experience working at Johnny's was priceless and really helped him to get to where he is today.  Finally, Jeff is a huge fan of charity events for children.  Being a father of a young child, Jeff really likes giving back to those children who are less fortunate.

Emerging Chef Related Questions
CFB-How and why did you become a part of the Emerging Chef’s Group?
Jeff-Jeff explained that his Wife actually contacted Emerging Chefs after they made the national Yahoo news for their first event.  His wife set up an interview with Emerging Chefs and the rest is history.  He is very grateful for his wife’s drive and passion for what he does!

CFB-Explain your thought process on planning “Sacrolicious” (Event, Venue and Menu).
Jeff-Once he entered the venue and saw the inside of the classically styled church, ideas starting running wild through his brain.  Jeff was sure to mention that David Moss played a big role in thinking outside of the box in terms of the event as well.   The menu started out with over 30 different menu items, but the more Jeff thought about the venue the more he wanted to relate the dishes to the Bible.  He was very careful not to cross any lines, but he did want to have fun with it and make the food tell a story.   In order to tell these stories, he clearly did a lot of research and has carefully thought out each dish.  He said the event is going to be very entertaining in addition to the food!

CFB-Cleveland has received some great national press as an up and coming culinary “go to” city.  How would you describe the culinary scene as a chef and what do you see happening down the road?
Jeff-Jeff truly believes that the redevelopment of downtown is crucial.   In addition to the tourists we hope to attract to the city, we also can’t lose more population.   He hopes that the casino and flats development will help with the reinvention and revitalization of this great city!

Fun Chef Questions
CFB-How would you describe your cooking style?
Jeff-Jeff talked about how his time spent at Sushi Rock helped influence him to have a passion for Asian fusion.  Besides this influence, his youth taught him just how important fresh ingredients are to make quality cuisine now matter what style.  He also mentioned that he loves traditional core Italian from his influence and time at Johnny's.   Jeff loves classic American home cooked meals, and is excited to see that this style is becoming a fine dining standard.

CFB-If you were to cook for me today a signature dish that really shows me what type of chef you are, what would you cook for me and why?
Jeff-If he could he would use Chelan sea bass and pair it with a lobster cognac and fingerling potatoes.  The key is to have the flavors be spot on because this is such a flavorful fish.

CFB-What is your favorite food to eat?
Jeff-Jeff is a huge fan of all things Seafood, he especially loves lobster! Jeff shared with me that he loves deep-sea fishing too. When he was younger catching a wolf fish was prized catch, but now you cannot keep them if you catch them.

CFB-When you go out to eat what are you looking for in a restaurant?  What do you expect from the chef?
Jeff-Flavor!!  Jeff explained that the visual appeal of a dish is very important, but looks can only take a dish so far.  The flavor of a dish is by far the most important issue for Jeff when he goes out to eat.  Jeff gave me an example of a chef that truly understands this concept.  Jeff said that Zach Bruell keeps food simple and doesn’t try to be too fancy, yet he is able to produce outstanding flavors.  Jeff really looks for consistency.  If he orders a meal once, he expects the meal to be consistent each and every time he orders it.  He also stressed that a restaurant needs to have consistency even when the head chef isn’t there.  He wants to see that a kitchen can run itself and maintain the highest level of expectations.  As far as service is concerned, he stressed that the best servers are servers who listen and provide useful information.

CFB-If you could have a meal prepared for you by any chef in America, who would you choose and why?
Jeff-Charlie Trotter or Ferran Adrià.  These are two of the top chefs in the world and he really respects their outside of the box thinking.

CFB-What is the strangest ingredient you ever cooked with, and what did you make with it?
Jeff-Jeff gave me a few examples, but this question kind of stumped him because he loves using so many different things.  He mentioned a fish head soup, using sweetbreads and other animal innards.  Jeff believes in using the whole animal like people used to in the past.

CFB-What was your worst kitchen disaster?
Jeff-Jeff said his biggest fear is someone getting sick.  He never wants that to happen.  He told me a story about an event he was a part of  where he was upstairs searing the chicken and sending it downstairs to be finished.  There was a miss communication and the cook downstairs simply sent the unfinished chicken out.  Every plate came back and it was more embarrassing than a disaster.  He also shared another story where a chef walked out on him and took his cousin, the dishwasher, with him on the night of their Valentine’s service.  He said he couldn’t believe it happened, the night was insane because of it.

CFB-What would you say is your best masterpiece in the kitchen?
Jeff-Jeff was honored that he was invited to the Chef’s Garden Food and Wine celebration.  During this huge charity event he prepared a Rack of Lamb with sour cherry gastric.  He wrapped the lamb in potato string and included saint germane cured salmon tartar in a squid ink ice cream cone with micro herb topping.  They had to make some adjustments on the fly and still the dish turned out to be a huge hit.  Jeff said he really felt great about doing so well again so many amazing chefs.

CFB-Where do you see yourself a year from now.
Jeff-He is very excited about the upcoming Touch Food Truck.  With his passion for Asian influence, he really hopes to make quality food with an Asian twist.

CFB-Who does the cooking at home?
Jeff-The cooking at home is a shared adventure.  Jeff said although he loves to cook, he really enjoys and appreciates when a meal is cooked for him.  He is also a huge fan of leftovers!

CFB-Best cooking tip for a novice who has a passion for food and cooking?
Jeff-Jeff wants the home cook to play and experiment.  He said it is very important to take notes so you can make adjustments.  Failing on a plate is a learning experience, not a disaster.

A big THANK YOU goes out to Emerging Chef's for giving me this opportunity, and to Jeff Fisher for sitting down with me and having a great conversation!

Loved the interview!
I'm actually going to Touch tomorrow for the first time.

After we see All About Eve at the Capitol's Sunday Classic series, we're going to finally try their brunch.

I say finally because I've wanted to go there for a long time.